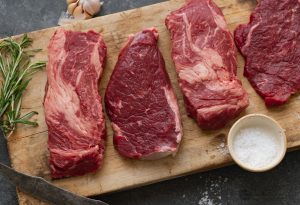 There’s an amazing amount of history (not to mention effort and skill) in the beef on your plate!

Since prehistoric man hunted wild oxen (aurochs) for food, beef has been desired throughout the world. Domestic cattle are descended from these huge beasts with long curving horns, which once wandered European forests.

The sharing of meat after the hunt may have been the first stirrings of social order. Meat, especially beef, was regarded as the food of heroes. The Norman Conquest in 1066 led to a steady rise in England’s cattle population, due to the Normans’ fondness for beef.

By the Middle Ages, eating meat (and fat), particularly beef, signified affluence. Conspicuous consumption was the order of the day for the wealthy nobility, with feasts designed to display the host’s wealth and status. In England, beef was the most popular type of meat. The first English cookbook- ‘Forme of Cury’ in the 12th century used beef in the recipes more often than other meats.

In medieval kitchens, a huge piece of beef would be roasted on a spit in front of a sizeable fire in order to feed a large household not only as a roast but as cold cuts, stews and pies throughout the week.

A Baron of beef (two sirloins joined together by the end of the backbone) was the roast joint of choice at royal feasts, particularly at Christmas. There are a few whimsical stories relating to how sirloin got its name. The most popular is that an English king knighted the cut, seemingly as a reward for being an exceptional cut of beef. The king in question has been variously identified as Henry VIII, James I or Charles II. In fact, the name comes from the Old French surlonge, – sur – above and longe –loin and found its way into English in the early 16th century.

Beef continued to be the popular choice at Christmas for many years. The famous diarist Samuel Pepys (1633-1703) recorded what he ate each Christmas. One entry states that he enjoyed ‘shoulder of mutton, some good ribs of beef roasted and mince pies… ‘

The Yeomen of the Guard at the Tower of London have been affectionately known as ‘Beefeaters’ since the 15th century. Henri Misson, author of ‘M. Misson, Memoirs and observations in his travels over England’ (1719) stayed in London in 1698 and related how ‘it is a common practice, even among People of Good Substance, to have a huge Piece of Roast-Beef on Sundays, of which they stuff until they can swallow no more, and eat the rest cold, without any other Victuals, the other six Days of the Week’.

Meanwhile, the less well off would take their smaller joints of beef to the local bakers to be cooked in his oven, as bread was not baked on Sunday. Thus began the tradition of the English Sunday dinner, which still continues today.

The ‘Roast Beef of Old England’ became well known and envied throughout Europe. The tantalising aroma of beef roasting on spits from shops and taverns wafted through the streets of 18th century London. The British preferred their beef plain and unadorned, simply hung and roasted until it was tender. Roast beef was seen as a symbol of English frugality, unfussiness, manly virility and prosperity, in contrast to foreign food, which was dressed up with fancy sauces and regarded with English disapproval. References to roast beef and Englishmen were alluded to in political prints of the time, particularly in the form of the popular John Bull figure.

Beefsteak clubs were popular with gentlemen. The most famous was the Sublime Society of Beefsteaks, founded in 1735, whose motto was ‘Beef and Liberty’. The twenty-four members met at the home of Henry Rich (a renowned harlequin at Covent Garden Theatre) to enjoy their beef. Eventually, the society settled in rooms at the Lyceum Theatre, where their steaks were accompanied with baked potatoes, onions, beetroot and chopped shallots.

It was at this time too, that Rules, London’s oldest restaurant was opened. Rules was established by Thomas Rule in 1798 and still serves traditional British food today, including roast rib of beef, steak and kidney pies and puddings, ox cheek, sirloin steak and calves’ liver.

Henry Fielding, the English novelist and dramatist (1707-1754) wrote a ballad ‘The Roast Beef of Old England’ for his play ‘The Grub-Street Opera’, which had its debut in 1731. The tune was played as Nelson and his officers went into dinner on HMS Victory on the eve of the Battle of Trafalgar in 1805. The tune is still played at Royal Navy Mess Dinners.

The tune was also played by the bugler to call First Class passengers to meals on HMS Titanic. Opulence was a feature of the menus for the affluent passengers of the doomed liner. Beef featured in both elaborate and plain dishes, such as fillet steak coated with Madeira sauce, served with artichoke hearts filled with peas and topped with slices of truffle and also roast sirloin of beef.

During the Victorian era, as working patterns changed and more women entered the workforce, cafes, restaurants and tea shops opened for lunch. By 1918, Lyon’s, Britain’s largest caterer operated over 200 tea shops throughout the country. The most popular dish on the lunchtime menu was roast beef served with two vegetables for two shillings (10 pence).

The roast beef that first appeared on the tables of the wealthy helped to establish the reputation of Britain as a meat-eating nation. While we may not consume the same vast quantities of beef as our ancestors, we still have a healthy appetite for beef which is so well known the world over, our French neighbours have nicknamed us ‘Les Rosbifs.’