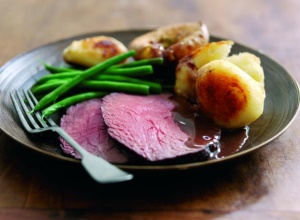 Feel like dining out? Here’s a very small selection of the restaurants where you can find Hereford Beef on the menu.

The Convenience has everything you could want, an impressive beer, ale and wine list, cocktails along with many tasty Hereford Beef dishes. Currently on the menu you can treat yourself to:

If you’re planning a Christmas Party you’ll also find Hereford Steak with Chips and Snips on the menu too.

The Foresters are the three time winners of the Surry & South West London Pub of the Year. Can you resist this Roast Ribeye of Hereford Beef? Not sure we can!

Have you had your roast ribeye of Hereford beef yet? pic.twitter.com/d4ugIaOhYk — The Foresters (@TheForestersHW) November 23, 2014

Or how about the pan seared sirloin?

We couldn’t resist the look of this classic roast Hereford Beef dish, available at the Anchor Inn.