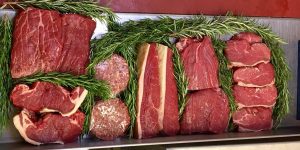 Everyone thinks of spinach in relation to iron but red meat is, in fact, the best iron rich dietary source available. The haem iron in red meat is two to six times better absorbed than the non-haem iron found in pulses, green vegetables and fortified foods. Haem iron also boosts the absorption of non-haem iron making it a good idea to serve a large portion of broccoli with your steak!  Lack of iron can lead to tiredness, poor concentration, palpitations, breathlessness and other problems, yet more than a quarter of women surveyed by the Meat Advisory Panel (MAP) have reduced their intakes of red meat because of misplaced health concerns.

Well-meaning blanket health advice to ‘eat less red meat’, flies in the face of facts. The National Diet and Nutrition Survey (NDNS) confirms that the average adult intake of red meat is well within the recommendation of up to 70g per day and the ongoing problem of low iron intake levels in young children, girls and women suggests that some people should be eating more red meat, not less.

The problem is that people don’t understand how much red meat they should be consuming. In the MAP survey, half of people (51%) had no idea how much is ‘too much’ and a mere 6% knew that the government’s recommended maximum of intake of red meat is 70g a day (cooked weight). But a few dietary considerations can make all the difference. Try eating red meat four or five times a week (a typical 70g portion is roughly the amount that fits into the palm of your hand), drinking a glass of orange juice with meat meals, serving green leafy vegetables with main meals, and eating fortified breakfast cereals.

Dr Carrie Ruxton is a dietitian and member of the Meat Advisory Panel (MAP)– a group of independent scientists and health professionals tasked to provide objective and evidence-based information about red meat and its role as part of a healthy, balanced diet. MAP is funded by an educational grant from the Agriculture and Horticulture Development Board (AHDB).